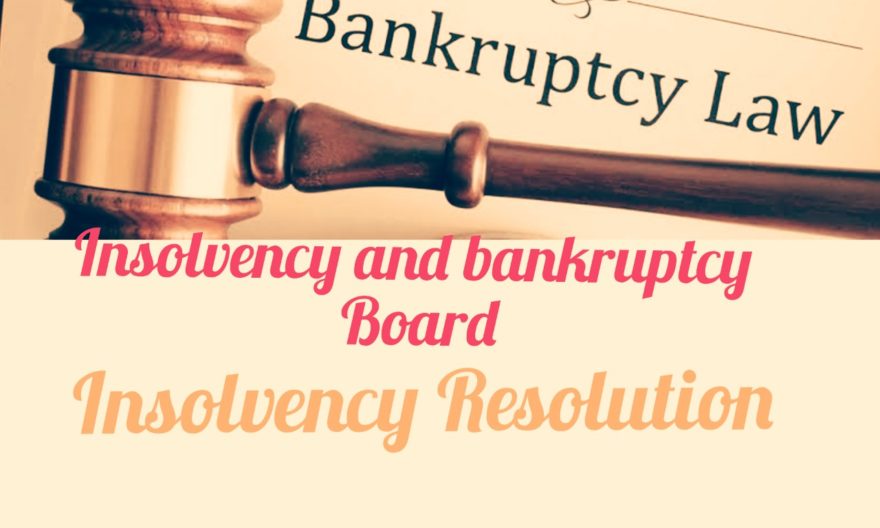 Why Insolvency And Bankruptcy Code Needed???

Before going into the topic lets look the difference between Insolvency and Bankruptcy ……….

Bankruptcy Meaning : It is a legal status of a business or company which cannot fully pay its debts out of its current assets.

# Indian banking industry is in crisis.Because of high NPA, Stressed assets ,the health  of banking industry is weakened and almost Rs 10 trillion of loans are struck.With these problems ,banking sectors are now in a worry to make further investments to boost the economy.As banking is the backbone of Indian financial sector,it is necessary to make laws to freeing up the money and also get back those Stressed assets especially from companies  and weak Entities that are in huge debts.

# Even though many laws are created to recover their loans ,those laws are not enough to create a healthy ecosystem in banking sector as NPA remains at high stage.

# To make companies to payback their loans ,reorganization or winding up of companies is needed. Reorganization and winding up are dealt with  separate laws .  Some of such acts are Contract Act,Recovery of Debts Due to Banks and Financial Institutions Act ,Secularization and Reconstruction of Financial Assets and Enforcement of Secutiry Interest Act 2002,Sick Industries company act and Winding up action under companies act 1956.

# Because of multiplicity of Laws and huge number of pending cases in court and tribunals ,winding up of companies and repayment of loans is not at all happening and thus stressed assets of bank remain high.

# So, banking sector and also companies  need a separate law to deal with  insolvent and bankrupt firms to make payment of dues and winding up in a smooth way.Thus insolvency and bankruptcy code is established and the code subsumes all the insolvency related provisions of all the before given acts.

# With the implementation of the code,their will be a single law to deal with insolvency and bankruptcy issues.

How  Insolvency And Bankruptcy code works ?????

# The code gives a time bound process for insolvency resolutions of companies and individuals.The code given a time limit to complete the insolvency work ,ie within 180 days.

# If the insolvency cannot be resolved ,the assets of the borrowers may be sold to repay creditors.

#Information Utilities (IU) will be established to collect , collate and disseminate the financial information’s to help the insolvency professionals so that insolvency resolution will be carried out smoothly.

#Insolvency and Bankruptcy Board of India will be formed to regulate the functioning of IP,IPA’s and IU’s.

# After liquidation,the code gives an order of priority to distributes assets during liquidation. The priority is

3.debt owed to a secured creditor

4.wages and unpaid dues to employees other than workmen

6.dues to central and state governments

An Example of How Insolvency and Bankruptcy code works : —–> Let as assume a company names AAA defaults (Fail to pay interest of principal on a loan or security when due). Consider AAA borrowed form bank named SSS and from other banks(Creditors) .

Note : Banks SSS and others are called as Creditors as they lent money to company

——> As their is no repayment of loan from company AAA,SSS(Creditor)   files an application National Company Law Tribunal(NCLT). Here Financial Creditor,Operational Creditor or Corporate Debtor can also file an application towards tribunal.For now consider SSS filed an application .

NOTE : If it is an individual who borrowed,then application must be filed before Debt Recovery Tribunal.

—–>It is now totally the duty of insolvency professionals once they are appointed by NCLT.

—–> Now insolvency professionals will form a committee of creditors (SSS and other banks ) to make a resolution plan so that the lenders get back the money.

Resolution Plan : The resolution plan include revamping the company through Purchase of more shares or equity ,de merger of debtors business,infusion of addition debt etc and thus it will allow company AAA to get some profit through further investment and providing  a step to repay the money in a time bound manner.The resolution plan will not wind up a company but will help in revamp a company from defaults.

—–>If the resolution plan is accepted or voted by 75% of the creditors(SSS and other banks ) ,then insolvency professionals will send the Resolution plan to NCLT.

—–> If the resolution plan is rejected by creditors (SSS and other banks) ,then the company goes into liquidation.

Liquidation meaning :Bringing the business of that company to end and distributing their assets to claimants(Creditors,employees etc ).

—–> Once liquidation or resolution plan is completed,company will give back the borrowed money,wages to employees etc in a priority manner as given above.

Thus Insolvency and Bankruptcy code will speed up the process for stressed assets(180 days ) and also Simplifies  the insolvency proceedings by resolution or liquidations plans.

Insolvency and Bankruptcy Board Of India :

# Established under Insolvency and Bankruptcy Code 2016.

#The board register and regulates the functions of Insolvency Professionals,Insolvency Agencies and Information Utilities.

# The board is responsible for the implementation of  Insolvency And Bankruptcy code  that consolidates and amends the laws relating to reorganization and insolvency resolution of corporate corporate persons ,partnership firms  and individuals in a time bound manner for maximization of the value of assets of such persons,to promote entrepreneurship,availability of credit and balance the interest of all the stakeholders.

# The board is designated as the authority under Registered Valuers and Valuation Rules ,2017 for regulation and development of the profession of valuers in the country.