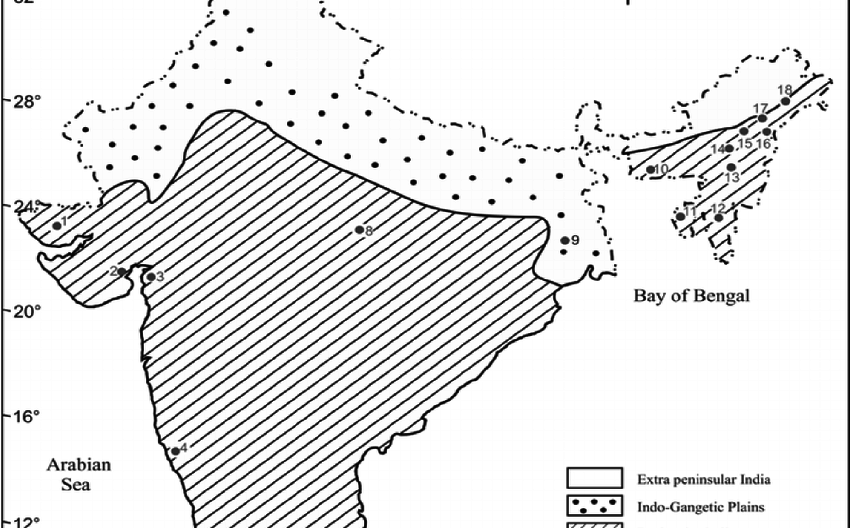 The northern boundary of the Peninsular Block may be taken as an irregular line running from Rann of Kachchh along the western flank of the Aravali Range near Delhi and then roughly parallel to the Yamuna and the Ganga as far as the Rajmahal Hills and the Ganga delta. Apart from these, the Karbi Anglong and the Meghalaya Plateau in the northeast and Rajasthan in the west are also extensions of this block. The northeastern parts are separated by the Malda fault in West Bengal from the Chotanagpur plateau. In Rajasthan, the desert and other desert–like features overlay this block.

The Peninsula is formed essentially by a great complex of very ancient gneisses and granites, which constitutes a major part of it. Since the Cambrian period, the Peninsula has been standing like a rigid block with the exception of some of its western coast which is submerged beneath the sea and some other parts changed due to tectonic activity without affecting the original basement. As a part of the Indo-Australian Plate, it has been subjected to various vertical movements and block faulting. The rift valleys of the Narmada, the Tapi and the Mahanadi and the Satpura block mountains are some examples of it.

The Peninsula mostly consists of relict and residual mountains like the Aravali hills, the Nallamala hills, the Javadi hills, the Veliconda hills, the Palkonda range and the Mahendragiri hills, etc. The river valleys here are shallow with low gradients.

Most of the east flowing rivers form deltas before entering into the Bay of Bengal. The deltas formed by the Mahanadi, the Krishna, the Kaveri , the Godavari are the main east flowing ones.

The Narmada, the Tapi, the Sabarmati, the Mandovi, the Periyar are important west flowing rivers. They forms  estuaries and mostly never forms delta.

THE FOLLOWING SUB-PARTS WILL BE COVERED IN COMING ARTICLES.