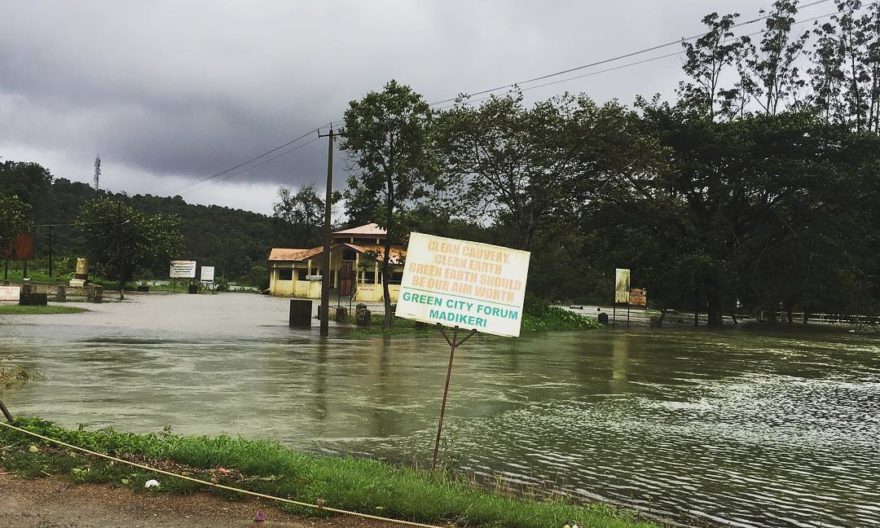 The Cauvery river originates at an elevation of 1,341m at Talakaveri on the Brahmagiri range near Cherangala village of Kodagu District ,Karnataka.

The Cauvery rivers ends at Bay Of Bengal at  Poompuhar ,in Nagapattanam District in Tamilnadu.

# The total length of Cauvery river is 800km.

# It flows through the states of Karnataka,Tamilnadu,Kerala and Union Territory of Pondicherry.

# North of Cauvery is Tungabhadra Sub-Basin #  From Brahmagiri range,the river flows into Deccan Plateau and reaches Shivanasamudram in Mandya district of Karnataka.

# At Shivanasamudram,the river branches into two parts and falls through a height of91m in a series of falls and rapids.

# One branch forms Srirangapatna Island and other forms a waterfall called as Shivanasamudra waterfall.

# The two branches join after the fall and flow through a wide gorge Mekadatu(Goats Leap) and continues its flow to form boundary between Karnataka and Tamilnadu.

# Bhavani joins from right side below Mettur Reservoir.

# Then Cauvery takes easterly direction and enter into the plains of Tamilnadu.

# The Delta part of cauvery is the most fertile areas of Cauvery basin. # It rises in Kodag District and Flows eastward.

# It then joins Cauvery river in Krishna Raja Sagar Lake.

# It rises in Wayanad District in Kerala by the confluence of two small rivers from Kerala.

# It then joins with Cauvery at Mysore District ,Karnataka.

# Noyil river rises from vellingiri hills in the Western Ghats in Tamilnadu.

# It Joins with cauvery river in Karur district in Tamilnadu.

#Two dam belong to Noyil river are 1.Orathuppalayam and 2.Aathupalayam ,first one in Tirupur           district and the second one in Karur District.

# It rises from Manjampatti Valley between Annamalai hills and Palni Hills near to Indira Gandhi          National Park in Tirupur District.

# It joins with cauvery at Karur District .

# Amaravati dam  on Amaravati river is located in Tirupur District.

#It rises from pushpagiri hills at kodag District in Karnataka.

# The length of the river is 50km.It joins with cauvery in Kodag District itself.

# Harangi Reservoir is located on Harangi river on the Mysore -Kodag borders.

# It rises near Ballala Rayana Durge in the Chikmagalur District.

# It joins with the cauvery river near Krishnarajasagara.

#shimsha river rises in Devarayanadurga hill in the Tumkur District of Karnataka.

# It joins with the cauvery near Shivanasamudra Falls.

#Markonahalli Dam is built across the river Shimsha in Tumkur District.

# It joins cauvery river near Mekadatu.

Some Of The Dams On Cauvery River: